At SLA-84, the Kuibyshev amateur club Aeroprakt, headed by student Yakovlev, presented the A-8.

Externally, A-8 reminds "Quickie" Bert Rutan. But it should be noted that very little has been known about the peculiarities of this scheme before the Y.Yakovlev tandem in our country. What should be the mutual arrangement of the wings and their profile, where is the center of gravity of the aircraft, how will the machine behave when flying at large angles of attack? All these questions could be answered only by testing the apparatus.

A-8 was built very quickly, but it did not start to fly at once. The attempt of the first take-off on the SLA-84 in Koktebel ended in failure: after a short takeoff the aircraft skiped. It was necessary to substantially shift back the centering and change the angles of the installation of the wings. Only after these improvements in the winter of 1985 the plane was able to rise into the air, demonstrating all the advantages of an unusual aerodynamic layout. Compactness, a small wettable surface and, as a result, low aerodynamic drag, inherent in the aircraft of such an aerodynamic scheme, allowed on the A-8 equipped with a 35-liter engine. s, to achieve a maximum speed of 220 km / h and a climb rate of 5 m / s. The tests carried out by test pilot V. Makagonov showed that the aircraft is easy and simple; management, has good maneuverability and does not break into a tailspin. On the tandem, its creators and professional pilots flew successfully. For the readers, the assessment given to the aircraft by V. Makagonov will be of interest:

- When running runs on SLA-84, the A-8 showed an imbalance in the longitudinal control channel, as a result of which a significant dive moment from the rear wing developed at a speed less than the tearing speed. This moment could not be compensated by the elevator. After the flight, the aeropraktovtsy solved the problem of balanced take-off by reducing the angle of the rear wing installation to 0 °. This was enough to ensure that at the take-off with fully taken control handle speed of lifting the tail wheel to take-off position and the speed of separation almost coincide. After detachment, the aircraft is easily balanced in the longitudinal channel. There are no tendencies to turn and bend. The maximum climb rate - 5 m / s is obtained at a speed of 90 km / h. In a horizontal flight, a maximum speed of 190 km / h is reached. The aircraft willingly increases the speed to 220 km / h with a slight decrease and when it leaves the horizontal flight it retains it for a long time. Obviously, with a more successful selection of a propeller of a fixed pitch, the speed can be greater. Over the entire range of speeds, the aircraft is stable and well-controlled, cross-links in lateral dynamics are clearly manifested. With the control knob completely selected and the engine running on a small gas at a speed of 80 km / h, the flow on the front wing is observed, the aircraft lowers the nose slightly, and then the flow is restored and the pitch is increased. The process is repeated in an autooscillatory mode with a frequency of 2-3 oscillations per second with an amplitude of 5-10 °. Disruption is not sharp, so the dynamics are smooth. Trends in heeling and reversal are not observed. The dependence of the forces on the handle and the pedals on their stroke is linear with the maximum values ​​for the forces on the aileron and the rudder, the height is not more than 3 kg and along the rudder direction is not more than 7-8 kg. The aircraft uses a side handle, so the costs of the handle are small. The aircraft showed good maneuverability. At a speed of 160 km / h, the turn is made with a roll of 60 °, and an accelerated turn from a speed of 210 km / h with a roll of 80 °. Hand control, an ergonomically advantageous armchair and a lantern, which is excellent from the point of view of the survey, create rather comfortable flight conditions. 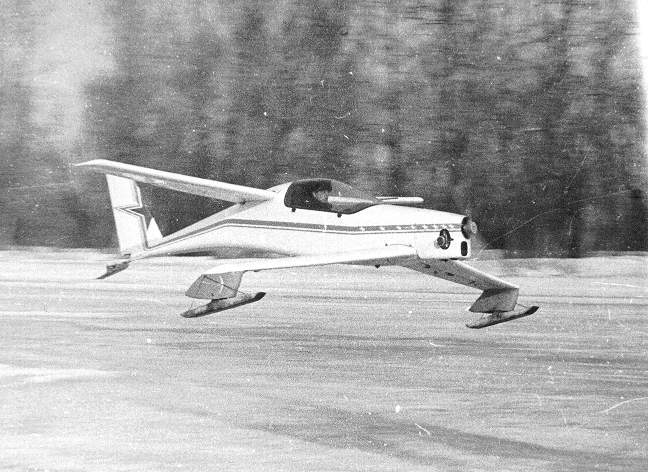 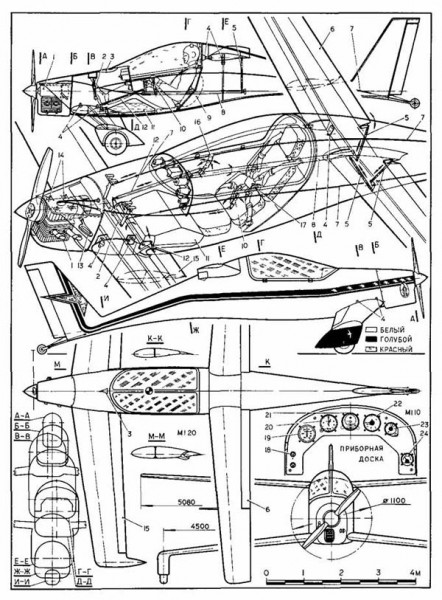 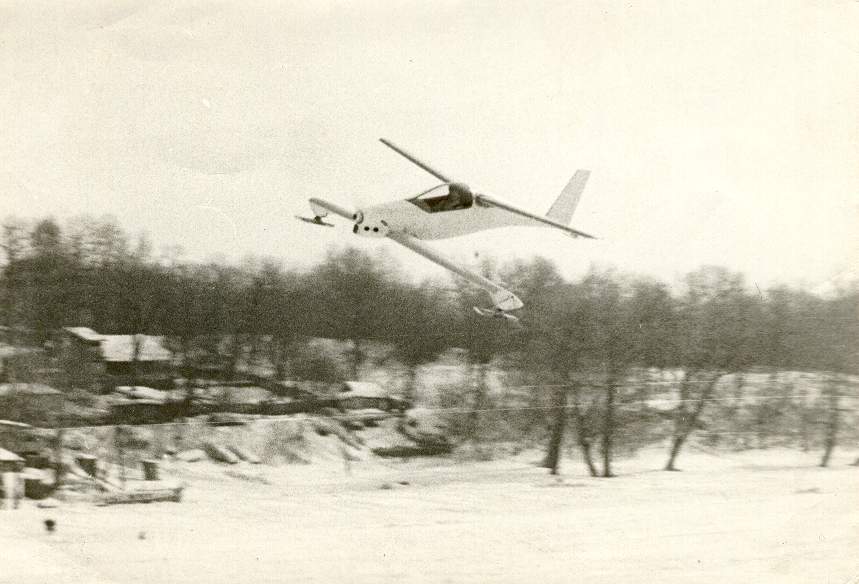 On the eve of SLA-85 "Aeroprakt" was once again closed, and all the aircraft were in a sealed room. Yuri Yakovlev and his friends had to make a lot of efforts before the A-8 and other aircraft of the club were delivered to Kiev. Having got to the meeting with a little delay, the A-8 immediately attracted the attention of both spectators and specialists, and the magnificent flights of V. Makagonov greatly contributed to the fact that the tandem became one of the most popular aircraft of the rally. When summarizing the results, the A-8 was recognized as the best experimental aircraft. Its author was awarded prizes of the Central Committee of the Komsomol, the journal "Technique - Youth" and TSAGI. On the recommendation of the technical commission of the meeting, the decision of Minaviaprom A-8 was transferred to TSAGI for purging in a wind tunnel, and then to the Flight Test Institute for more detailed in-flight research. The main prize for Yuri Yakovlev, of course, was the invitation to work in OKB named after OK Antonov.

A-8 is made entirely of plastics. The front and rear single-spar wings are approximately of the same design. The wings are made detachable, but do not have connectors in scope. When docking, the wings are embedded in special cutouts of the fuselage. The front wing is equipped with an aerodynamic profile RAF-32 and is installed at an angle of + 3 °, the rear wing with the profile "Vortman" FX-60-126 is installed with an angle of 0 °.

The wing wings have a wall made of fiberglass cloth and shelves made of carbon fiber. Three-layer wings lining (fiberglass cloth - polystyrene - fiberglass cloth). When gluing the parts and assembling the A-8 airframe units, various epoxy adhesives, mainly K-153, were used.

Fuselage type semi-monocoque also has a three-layer plastic construction. He has a glue with a keel. The chassis consists of two wheels from a 300x100 mm map installed in special fairings at the ends of the front wing, and a fiberglass spring spike with a steerable tail wheel measuring 140x60 mm. The main wheels are equipped with mechanical brakes. The role of the chassis shock absorber is carried out by the very flexible front wing itself. The control system of the aircraft includes: a flap on the front wing, performing the functions of elevator, ailerons on the rear wing and rudder. The drive for controlling the ailerons and elevator is placed on the side handle with small strokes, while the pilot's handle in flight lies on a special armrest. Thus, the principle of carpal management is practically realized. The side handle of the A-8 control at the meeting was highly appreciated by all the pilots.

At A-8, the RMZ-640 engine was used from the Buran snowmobile. The motor develops a power of 35 liters. from. at 5000 rpm. The air screw has a diameter of 1.1 m and a pitch of 0.7 m. The maximum static thrust of the screw is 65 kg. The fuel tank is located in the bow of the fuselage under the pilot's feet. The engine is designed to use gasoline A-76. 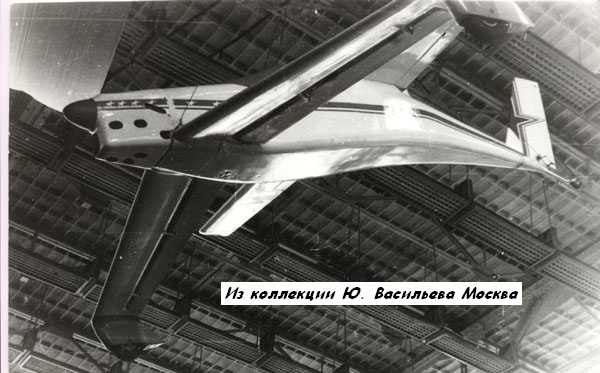 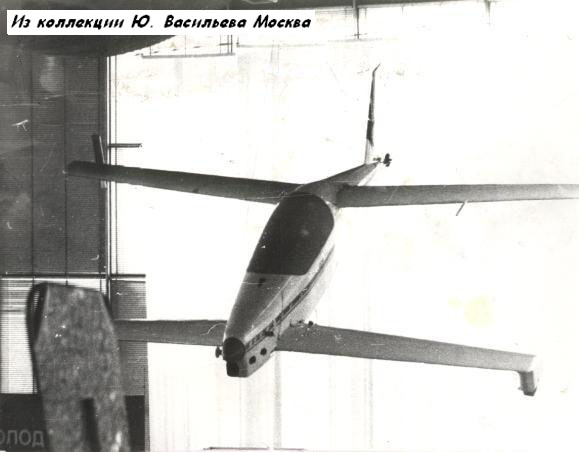 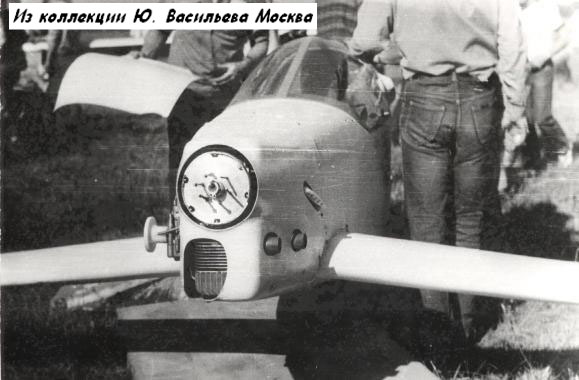 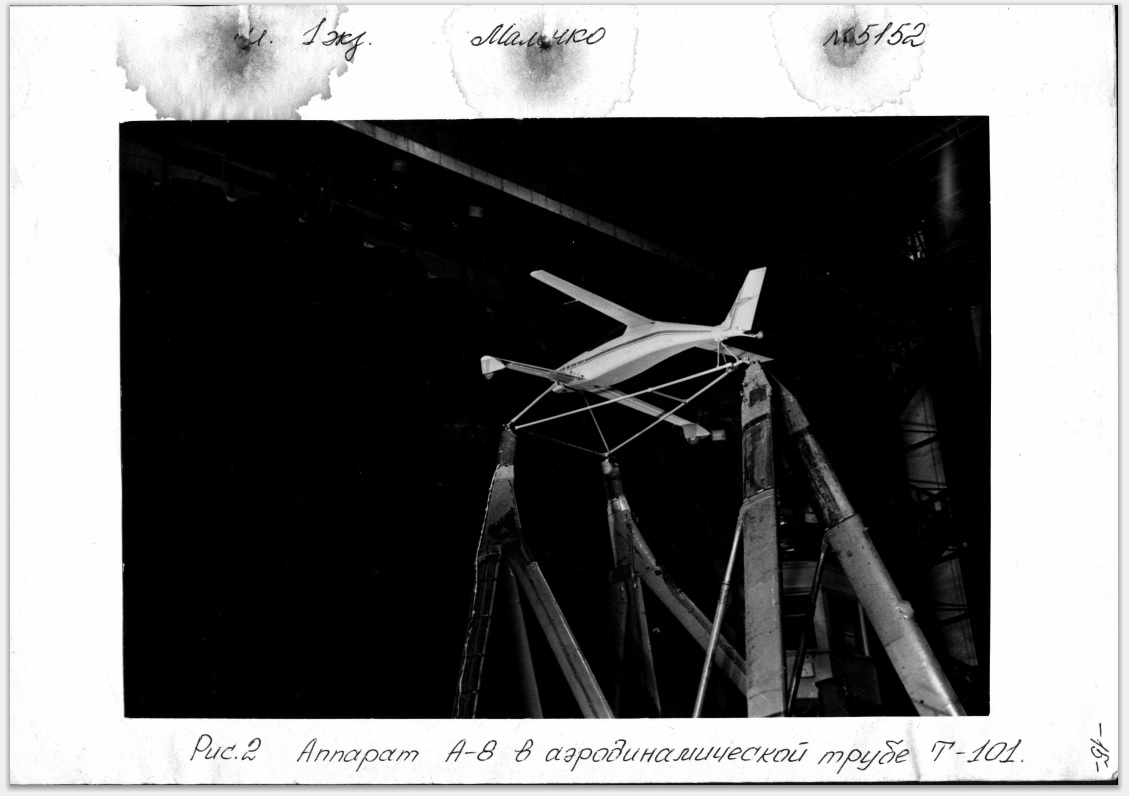 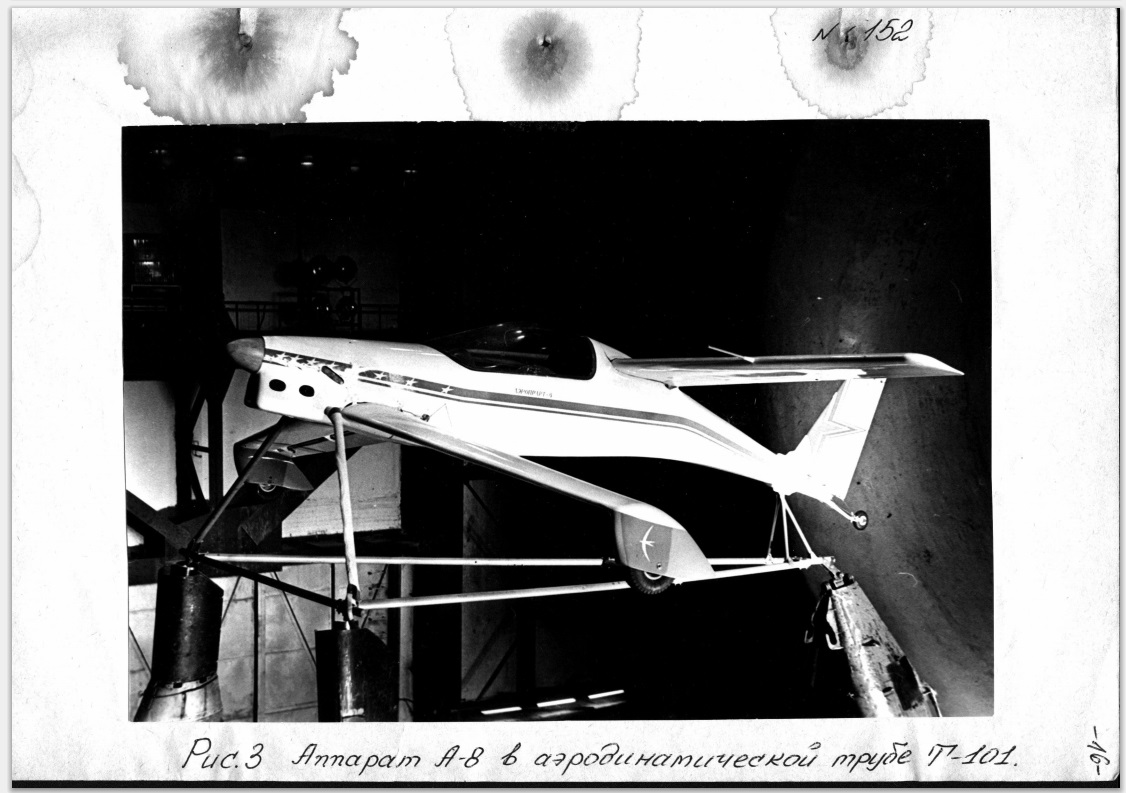 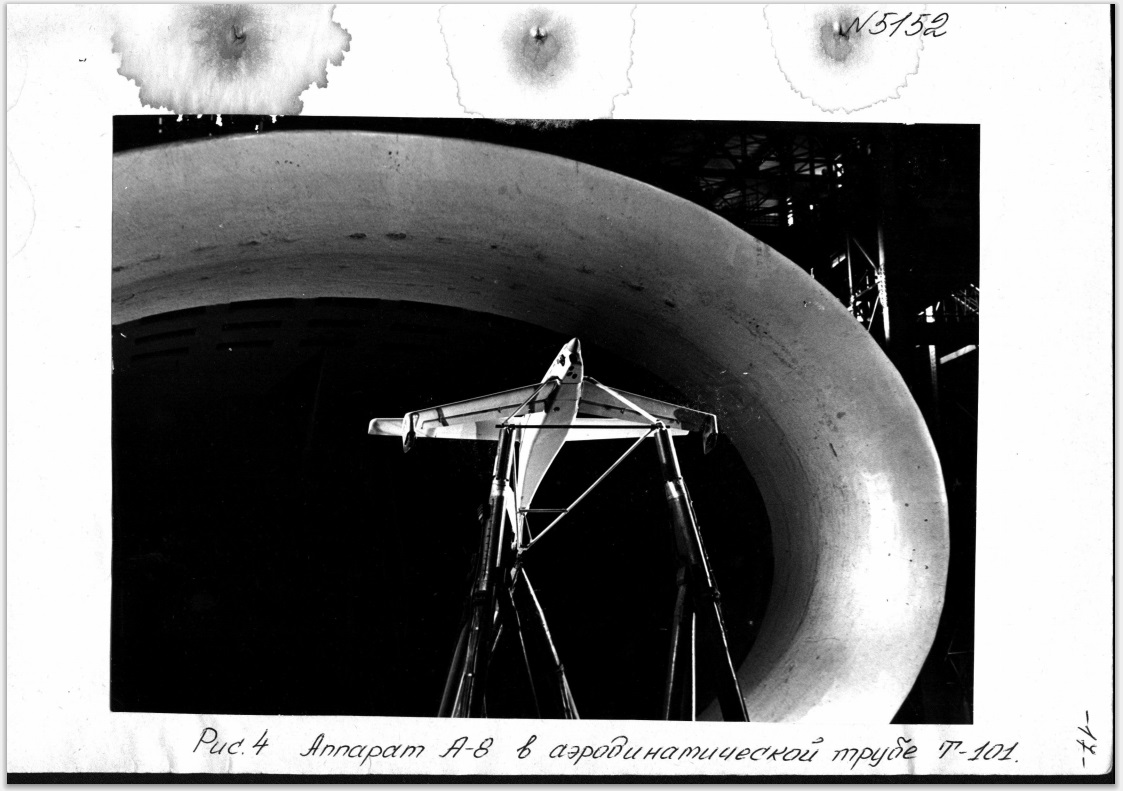 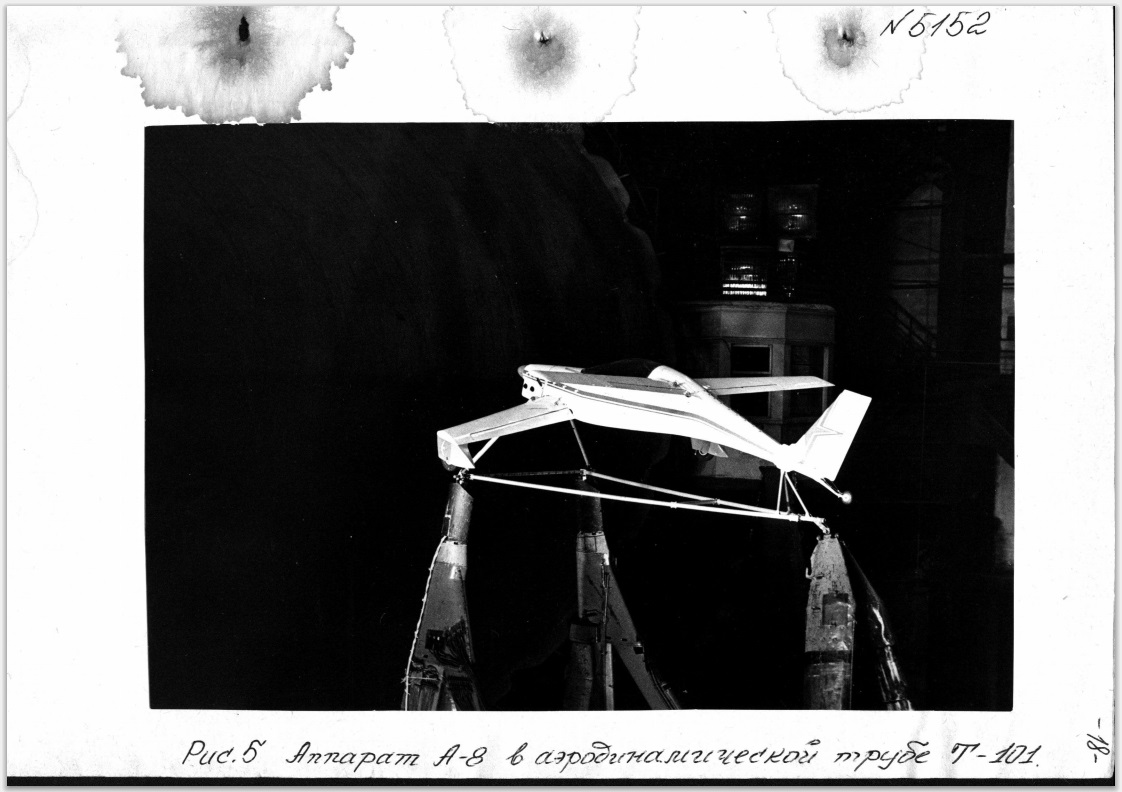 Yakovlev Yury Vladimirovich - "The plane, thanks to which I was invited to work in Kiev, was restored to the museum level, the airplane parts lay for more than 20 years in the open air on the territory of the hydroplane company." Thanks to them for storage. "There was not a lantern on the plane, to spend a lot of time of his company Aeroprakt on the production of equipment and the lantern itself, as well as a flap covering the upper part of the wing in the area of its attachment to the fuselage and the dashboard. "
From site: http://www.reaa.ru/cgi-bin/yabb/YaBB.pl?num=1499706040 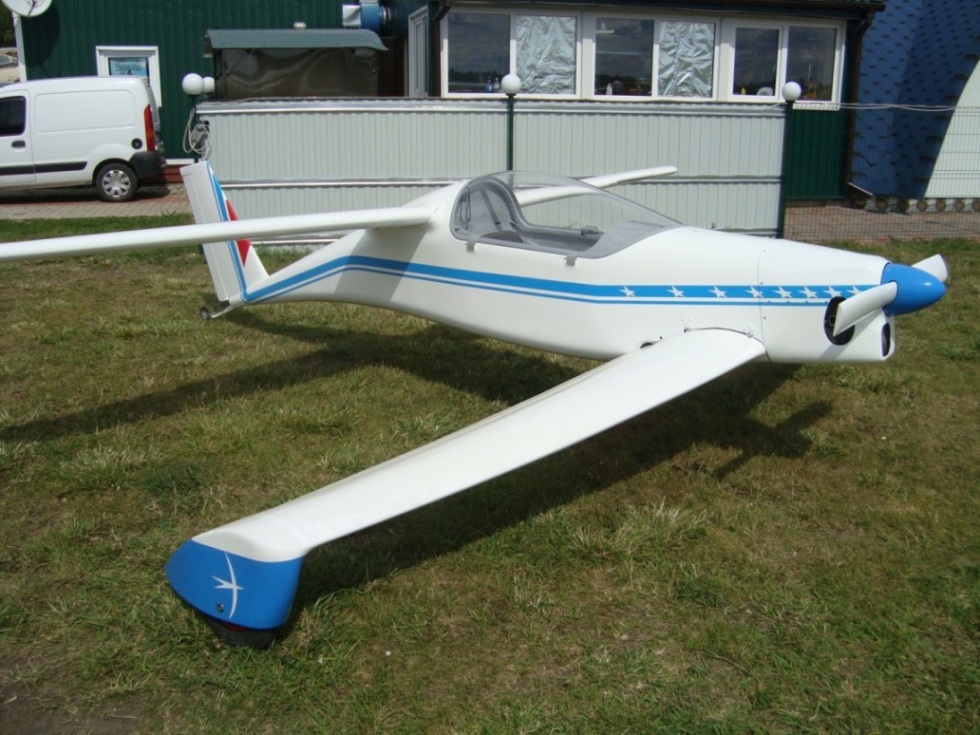 But the consequences of 20 years of downtime ... but well that restored! 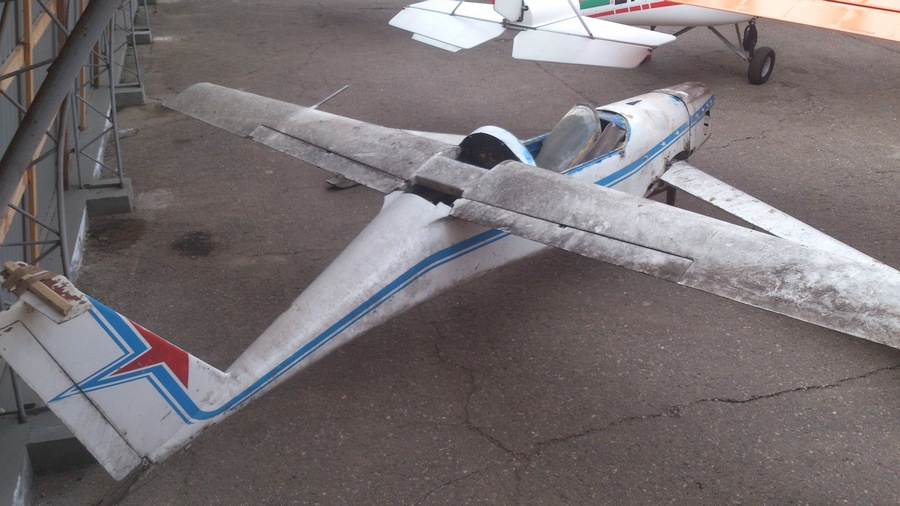 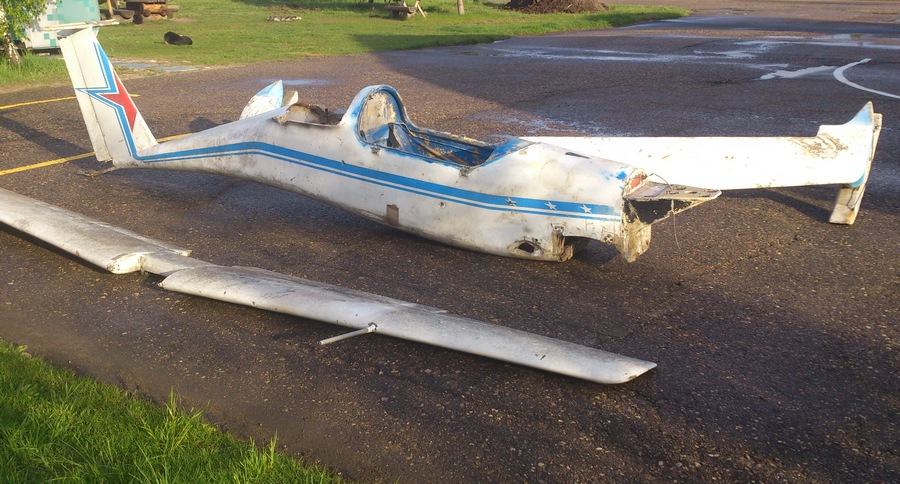